Menjangan Island is located in the Taman National Bali Barat (Bali National Park), 25-30 minutes by boat from Pemuteran depending on sea conditions and is one of the best known dive locations in Bali.

Diving and snorkeling opportunities abound around Menjangan Island which is roughly 2km in length by just over half km in width. Menjangan Island holds more than a dozen recognised sites, ranging from sheer drop offs to 60+mtrs, small caves, sandy slopes and a beautiful blue green lagoon with some very nice resident ghost pipefish. With Menjangan Island being located so close to the straits between Bali & Java, sightings of deep water pelagics are a regular occurrence. During the rainy season is the best time to have a chance to see manta and baby (±7mtr) whaleshark, but these, like everything, cannot be guaranteed. However bigger fish are the norm at Menjangan, turtle, napoleon, grouper, big barracuda and shark are all regularly seen. But don’t be surprised if you’re shown and entranced by the little things as well. Menjangan Island also has its own little wreck known as Anchor Wreck named because of the anchor located in 5mtrs of water at the top of the reef. This is the wreck of a 200+ yr old wooden trading vessel, so there is not much left to look at and it is very deep.

Be warned however that there is a National Park entrance fee of 200,000Rps per person, per day. This additional fee is payable on-site. Children 12yrs and under are exempt from this new entry fee.

Description: Similar to Sandy slope and Peti Reef only at this point things start to get steeper and deeper. Post III also offers a long jetty and a path leading in land to the renovated temples at the back of Menjangan. A good place for a break but doesn’t offer any beach to speak of. If going to the temple always observe the cover up rules, wrapping a towel around you is enough. But always check if it’s ok to enter, if your not sure take photos from outside. Snorkelling here is also excellent and it makes an excellent alternative to post II when the wind picks up in the summer, as the island offers a lot of shelter.

Description: Heading off in the opposite direction to Coral Garden this site offers shear drop offs going all the way round to Post II (Belok Kiri). This vertical wall offers many cubby holes for things to hide in. The wall is a little way out from the island like most of the diving around Menjangan and tops off at the 5mtr mark, where it slopes gently in to the island. These shallow around to the Bat Caves are also home to Triggerfish in the breeding season, which usually starts at the beginning of the rainy season. They lay their eggs here and get very territorial. During the rest of the year they don’t bother you around here, Triggerfish Alley towards the west end of the island is a different story.

Trip Time: ±35 minutes Current: Slight to Strong Brief: Steep Wall, one of the better dive sites around Menjangan Island. Beside many small marine life also Pygmy Seahorse’s. Big fish like Sharks, Trevally, Napoleons, grouper like to hang out in the channel.

Description: On the outer north of the Menjangan Blue Lagoon is the start of the Eel Garden Dive. Running along a steep wall dropping into open Ocean this can be one of the nicest dives around Menjangan. As you head along the wall towards the channel, the top of the reef gently slopes down to meet you while you drift along and into the channel. Strong currents are prevalent here making it a good hangout for big fish, Grouper, Napoleon, large shoals of Trevally and Shark all like to hang around this area when the current is running. As the reef comes down to meet you at 20+mtrs you have two choices. You can either turn in and left, which will bring you into Blue Lagoon or continue on into the Eel Garden itself. Left is where we usually find the Pygmy Seahorse’s, following a coral slope on your left side, the right side disappears into a long sandy plateau as you move on into the Lagoon you will have to run the gauntlet of triggerfish alley. A sandy valley populated by titan and yellow margin triggerfish. You have been warned. Continuing along the wall as the sand comes to meet you, brings you to a small coral mound that swings round to a sand ridge. This ridge is the garden itself, home to hundreds of garden eels that all rise up to greet the current. This is the entrance to the channel between Menjangan and Bali; this is where you’ll find the bigger fish when the current is running. Swimming up the ridge brings you to 16mtrs and midway up a small hill populated by many corals, fish and shrimp. Take the right side your going through the channel itself, left will take you around the outer edge of the lagoon. If you come to the top of this small hill you’ll find a beautiful coral garden, which if the currents are running too strong is where you may end up hiding till its time for safety stops. On good days you drift around the hill and on into the Aquarium, which is the only way to describe this place. White sandy channels running through clumps of corals, soft, hard, fans, tables, sponges and fish galore. All in the 12mtr range.

Description: This horse shoe lagoon offers a safe haven when the currents are running too strong. Shallow sandy bottom, maxing out at about 16mtrs, this often underestimated site is a great little dive especially for critters. The whole inside curve offers mixed coral hiding places for Pipefish, Ghost pipefish, Robust ghost pipefish and Stonefish. Inside the lagoon are some pretty coral heads with large shoaling groups of fusiliers, damsels and glass fish, which bring in the hunters. There is a beautiful variety of Lionfish in this local, feathered, winged and half winged.

Description: Here is the main warden station with jetty, one of only three points where you can actually get ashore. Not the best location on the island for diving having a sandy bottom sloping from 16-18mtrs down into the deep. Generally this location is good for breaks and snorkelling having coral running east towards the mangrove with lots of small fish. West heads towards the channel between Menjangan Island and Bali, strong currents can run through there (see Eel Garden & Lagoon). Though this area is mainly sand with small areas of coral until it reaches the channel. Drifting out of the Eel Garden into this area has occasionally offered the chance of Manta during the Rainy season (Dec – Mar)

Description: The back of Menjangan Island from here till Post III is all very similar. Looking out towards Java and the tip of Bali it offers a beautiful variety of steep slope and wall. All dropping into the blue and backed by open Bali Sea. Excellent coral cover, many fish, turtle, shark and critters. Everything you’d expect of a coral reef in a tropical paradise. Currents generally run along the back here in one direction or the over, the dive always takes the easy route getting picked up at the end. Currents can run strong here and like most drift dives you should stay close to the reef and watch your depths. In the summer the back of the island is also the best place to get out of the winds that come up from the south and make for choppy/rough conditions in the afternoons. This is common July through August till mid September. The site itself is named after the anchor sitting in 5mtrs of water at the top of the reef, this is the starting point for three dives depending on which way the current is running or if you want to look at the wreck itself. Anchor wreck seems to be an unknown 19th century trading vessel, possibly a slaver that ran into trouble and anchored at Menjangan Island for protection and promptly sank. Following the anchor chain down brings you to a mast at about the 30mtr mark and continues bows to stern out to sea. The far end lies in 46mtrs of water, not for the faint hearted or ill experienced. It is never the less an interesting one off, sharks inhabit the lower reaches and are often seen. The contents of the wreck are copper sheeting and bottles of Arak by the look of it. Most of the bottles are gone now, taken by guides or guests. This is unfortunately the problem at many wreck sites throughout the world. Better to take only pictures and leave only bubbles, as the saying goes. So the rest of us can enjoy diving here in the future.

Description: A shear drop off, this great wall offers some hairy drift diving when the current is running. Though possible to start here, most divers start at Post II, doing Belok Kanan and drifting round the island. A good place for shark and other big fish. Bat Caves get there name from the above water caves running along the east side of the island, which are home to hundreds of Bats. These caves are shallow and accessible via snorkelling. Make sure the boat is at hand as the caves are out of site of both Post II & III.

Description: Turn Left (Belok Kiri:) and you start the Caves. This is a very scenic wall, going in and out, with steep sided gullies plus small caves. The wall runs deep on this side of the island, Manta and Whale Shark have been seen here in the rainy season. But the later isn’t a common sighting in these waters. Big Barracuda hang out here, surgeons, snapper, grouper all hiding in the many crevasses an over hangs. With the sun behind, the wall takes on a surreal property with cathedral like caves. It also offers some of the good snorkelling, as guests can follow the edge of the drop off catching bubbles, enjoying the abundant marine life and vibrant corals. Sometimes during the dry season (July-Sept) this area can become inaccessible due to strong wind coming from the south.

Trip Time: ±30 minutes Current: Slight to moderate Brief: Wall with dramatic scenery and a deep blue back drop off, lots of marine life.

Description: Further along from Post II is a mooring buoy which is half way along the drop off. If the current is in the opposite direction both dives and snorkelers can start here and head back to Post II with the current. You can also continue on from here towards the mangrove area, before the wall peters out to become a steep sandy slope. Though it continues to be a wall for quiet some distance beyond the buoy. As before the wall offers dramatic scenery and a deep blue back drop with lots of marine life. 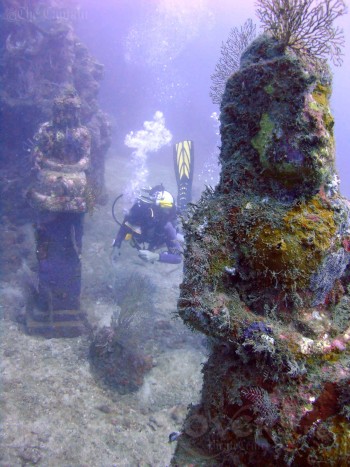 with its wide variety of reefs, award winning BioRock coral projects, Garden of the Gods and Underwater Temple Garden 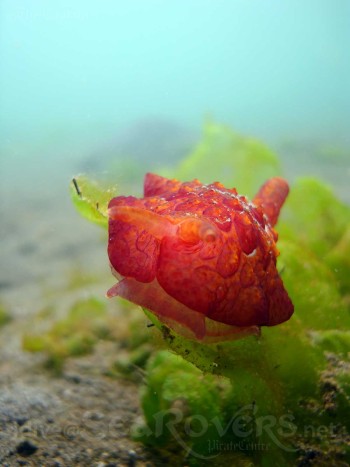 famous for its critters and macro delights. Plus reefs little known or further afield.